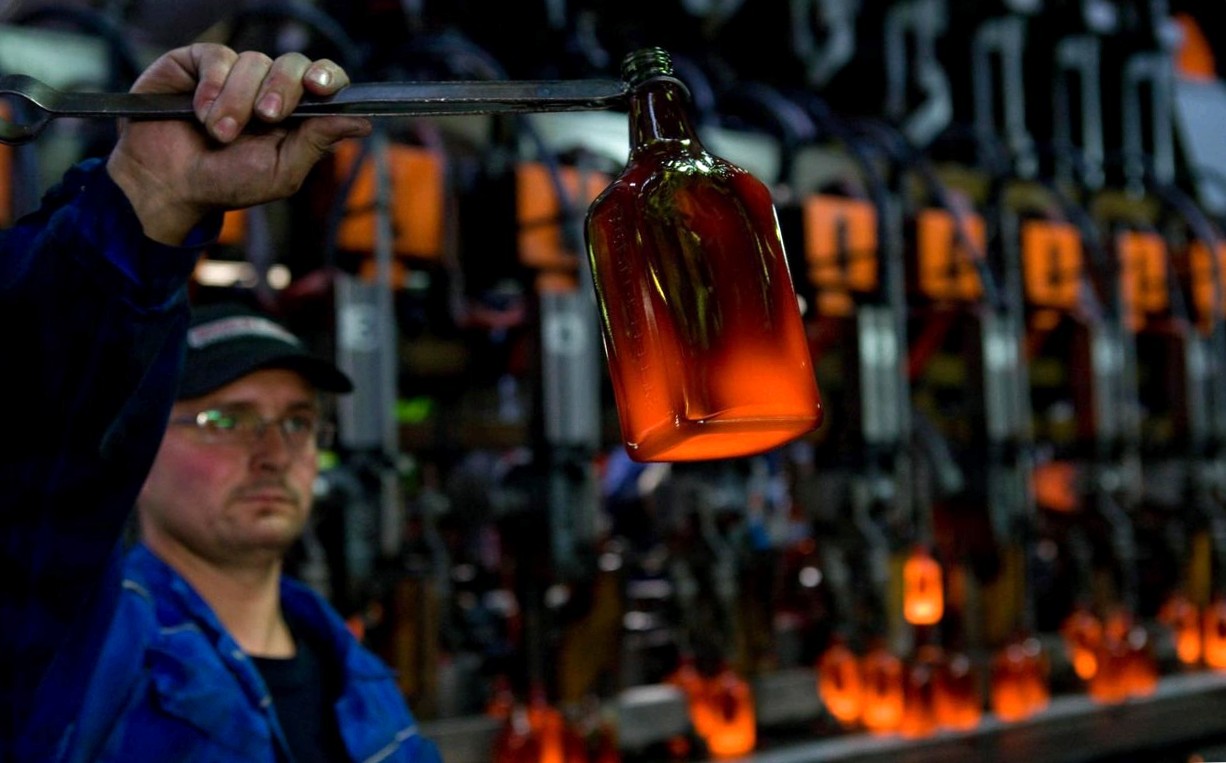 For a long time, his company has also been producing PET bottles. But nikolaus wiegand is not enthusiastic about the plastic goods. "For the protection of the contents, glass packaging is simply better", says the managing partner of the wiegand group, one of germany's largest bottle manufacturers.

Wiegand produces 5.5 million glass bottles a day. Most of them at the headquarters in steinbach am wald (district of kronach). Gigantic quantities of glass are melted around the clock in four crude melting furnaces in steinbach – more than 1000 tons a day. Machines then press the melted substance into the glass. Customers of the cooled glass molds are well-known beverage manufacturers. In terms of pieces, wiegand produces beer bottles most often. But wine bottles are the most important sales market. "A bottle of wine is more expensive than a bottle of beer. It weighs three times as much", wiegand explains.

For the 44-year-old company boss, glass is "the most environmentally friendly packaging material, if it weren't for the energy costs". All glass manufacturers can tell you a thing or two about this: they are among the industrial companies that use energy most intensively. Only steel stoves, paper mills or cement plants sometimes need more.

The wiegand group consumes just under one terawatt hour (1,000 gigawatts) of gas a year at its three plants in the rennsteig region to operate the melting furnaces. In addition, there are 180 gigawatt-hours of electricity per year (180 million kilowatts), partly additional for the furnaces, partly for compressors and cooling systems. By way of comparison, a single-family house consumes around 5,000 kilowatt-hours of electricity per year.

"We look at the exchange prices for electricity and gas every day," says wiegand, reports wiegand. The price of energy changes. There are monthly fluctuations of between ten and 20 percent. The glashutte has to calculate precisely, because energy consumption accounts for around one-fifth of production costs.

What will happen when energy becomes more expensive?? Business graduate nikolaus wiegand makes a simple calculation: "the product will become more expensive. If the higher price is not enforceable with the customer, there will be less profit." the operation of a glashut became less economical. "If the problem only existed in germany, we would have to think about growth in other places", says wiegand.

Less capacity in the rennsteig region? It would be a hard blow for the local labor market. Because in addition to wiegand, other manufacturers also traditionally produce glass here. A total of 25 percent of employees in the german hollow glass industry work at sites in the franconian and thuringian forests, within a radius of 50 kilometers. The german companies in the industry can be paid off on two hands, operate 20 to 25 plants in this country.

The heinz group in nearby kleintettau (also in the district of kronach) is also one of the major manufacturers of hollow glass. Later, however, it is not wine or beer that goes into her products, but perfumes and fragrances. "We now have people who are only concerned with saving energy", reports joachim lippert, technical manager of the manufacturer of cosmetics flacons. For a long time, it has no longer been possible to afford to rely only on national electricity suppliers. "We will look for the most favorable one in europe", lippert clarifies.

The melting furnaces at the kleintettau site are mainly powered by electricity and consume around 70 gigawatt hours per year. It makes a difference if heinz has to pay eleven cents per kilowatt hour for electricity in germany, while its main competitor in france only has to pay 5.5 cents, explains lippert.
According to lippert, such an electric melting furnace has to be replaced every four years. This costs millions, but also helps save energy. "In the past ten years, an electric furnace like this has become about 20 percent more effective, says lippert.

Wiegand has also discovered a number of ways to save energy. The people at steinbach use the waste heat from exhaust gases generated in the plant to preheat the melting material – mainly waste glass residues. This facilitates melting. The company already has a melting stock preheater of this type, and a second one is currently being built. Wiegand estimates energy savings of seven to eight percent.

Wiegand and heinz also use waste heat to operate machines for cooling, for example for electronics or for the water heated during compression molding. There are also other ideas at both companies. This is how wiegand uses his waste heat to dry the wood chips of a commercial supplier. Heinz wants to realize its tropical house project next year. With waste heat, tropical fruits and fish will then grow and flourish in the frankenwald.

Like wiegand, heinz believes that despite high energy costs, people do not want to do without glass as packaging. And this despite the fact that heinz started producing plastic packaging containers as early as 1955. "Plastic has limited applications", explains lippert. Most perfumes contain alcohol, he says. And alcohol and plastic did not mix well.