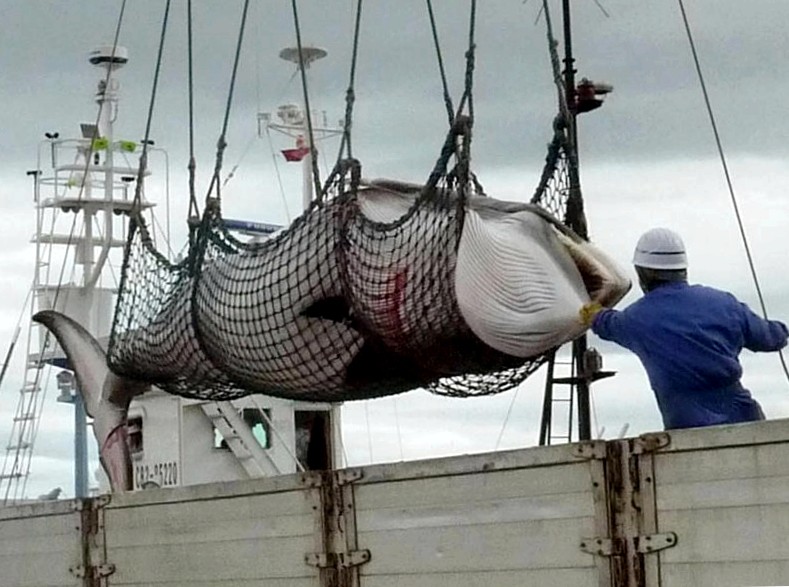 Despite international criticism, japan wants to withdraw from the international whaling commission (IWC) and resume commercial whale hunting for the first time in around three decades.

As government spokesman yoshihide suga announced in tokyo, the withdrawal from the IWC will take effect on 30 june. June in force. From 1. July, japan will resume commercial whaling. But it will be limited to japan’s territorial waters and exclusive economic zone, the spokesman said. Japan will stop the hunt in the antarctic – according to official statements for "scientific purposes. Japan has already been killing hundreds of whales each year.

Greenpeace condemned japan’s decision to withdraw from the IWC. Overfishing both in japanese coastal waters and in areas of the high seas has led to the depletion of many whale species. Australia also criticized. Her government is "extremely disappointed," australian environment minister melissa price said in a statement. It called on the government in tokyo to return to the commission. Australia will continue to "resolutely oppose all forms of commercial and so-called scientific whaling".

Japan had threatened to leave the IWC several times out of frustration over the moratorium on whaling that has been in place since 1986. Tokyo has complained for many years that some IWC member countries are only concerned about whale protection. The IWC’s original task, however, is the conservation of stocks and the sustainable use of whale resources.

Japan recently submitted a request for the resumption of commercial whaling at the IWC meeting in brazil. However, the IWC rejected the request. It has become "one hundred percent" clear to japan that a resumption of "sustainable whaling" in the IWC, as seen today, is impossible, the government in tokyo said. However, there will be a continued commitment to international cooperation for the proper management of maritime resources. Japan will attend the IWC’s future deliberations as an observer.

Tokyo argues that the stocks of some whale species, such as minke whales, had recovered significantly. Government sources also said that japan will begin hunting minke, sei and bryde’s whales in its waters in july. Catch quotas will be allocated based on the IWC’s calculation model. The organization oceancare calls this "misleading". The RMP model is not in force because of the moratorium. On the other hand, the other two whaling countries, norway and iceland, use variants of the model that are not recognized and lead to higher catch quotas, it said.

Oceancare fears that japan’s withdrawal from the IWC will threaten the survival of some whale populations in the northwest pacific as well. It also contradicted japan’s claim that certain whale species, such as the minke whales, had recovered significantly. These occurred in "complex population structures. Thus a zwergwalbestand in the northwest pacific is considered as strongly endangered. "This population will not withstand direct commercial hunting. We will therefore lose this and probably other whale populations," criticized nicolas entrup, ocean policy expert at oceancare.

Meanwhile, most japanese don’t eat whale meat at all. According to the government in tokyo, however, this will quickly change as soon as japan resumes commercial whaling next year. At present, "only" around 5,000 tons of whale meat came onto the market each year, he said. Before the moratorium came into effect, 20 goals had been scored.000 tons have been consumed.

Apart from the asian island kingdom, iceland and norway are the main whaling nations, both of them also for commercial purposes. Norway – the country that hunts the most whales – had lodged an objection to the whaling moratorium, iceland made reservations.